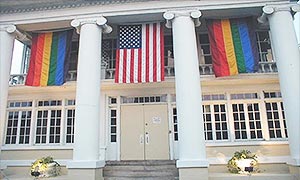 WSAZ-TV’s Chelsea Ambriz, 26, is charged with misdemeanor battery. She allegedly shoved the tv station’s news host, Erica Bivens, in a bar in Charleston last Sunday. As well as a fractured skull, the news anchor suffered a ruptured ear drum in the altercation.

In the police report, the officer stated that Bivens said she and her husband had been out and decided to go to the Broadway bar. Bivens claimed Ambriz allegedly began hitting on her husband. Bivens said she confronted Ambriz and the alleged shoving started, causing both women to fall over the bar area.

The officer advised Bivens to go to Magistrate Court and obtain a personal protective order against Ambriz, but Bivens was not sure about doing that since they work together. They no longer work together as they have both been fired. If Ambriz is found guilty, she faces up to a year in jail and/or a fine of no more than $500.